This was supposed to be about inventions, but it turned into a post about my 80's hair. I got sidetracked, ok?

This week's Theme Thursday topics is: Things I wish someone would invent

What I should be wishing for is something that would benefit all of mankind, like a cure for cancer or dinosaur home-cloning kits. Seeing how I'm probably in the top 100 of the Laziest People On The Planet and a bit of an asshole, I'm gonna go with wishing for inventions that would benefit me directly and simplify my life. Also because pet dinosaurs may be a really awesome idea in theory, but I think we all know how Jurassic Park ended. Plus your neighbours would probably hate you when your velociraptor ate their toddler or your brontosaurus left Poop Mountain on their front lawn.

Why has no one invented professional-grade cordless hairstyling tools? You would think an industry that generates billions of dollars a year and is constantly refining/replacing/reworking all forms of hair products would throw a little money towards fixing one of the banes of my professional existence, which is the snakes nest of elevently gajillion cords I am forced to manuver around every day. Between blowdryers, curling/flat irons, clippers and trimmers, the area around my powerbar that all my tools are plugged into is a hazard, not to mention all the cords are ugly as fuck and keep getting tangled up on my tool trolley.

Technology is almost to the point of being able to implant your cel phone in your hand, but they haven't figured out how to make a cordless blowdryer?? I do have cordless trimmers, but the recharger has to be plugged in, which does not solve the cord conundrum. Apparently the rechargeable battery required to power a professional-grade blowdryer would large and heavy and it wouldn't hold a charge long enough (I know this because I ask every single sales rep, every time I see them). Back in the 80's there were butane curling irons, which were AWESOME and I cooked my wicked mall-bangs around mine at least 7 times a day ( Brush. Curl. Wait until bangs start to smoke a little. Leave iron in just a couple more seconds. Pull off the singed bits. Backcomb. Hairspray. Repeat. Repeat. Repeat.) 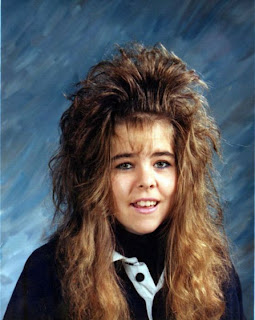 Anyways, those butane curling irons seem to have disappeared off the market. Probably because some dumbass was smoking while curling and ignited the butane (I guarantee that happened because everyone smoked while doing their hair because in the 80's we did not fear death by hair-mishap. It was a fact of life and every woman I know in her 40's has at least one burn scar on their forehead from her curling iron to prove it), so they had to take it off the market. And all the 80's girls cried and hugged their Aqua Net close to their chests, fearing their ozone-murdering hairspray would be the next victim (We were not environmentally aware back then. Only dirty hippies recycled, and being able to braid your armpit hair was like committing social suicide, unless you lived on Denman or Hornby Island...then your armpit hair and BO was overlooked because you had the best pot. Did I mention we were also a tad self involved?)

Back on topic: Someone needs to invent cordless styling tools, preferably with an alternate green energy source, because it's about time we started making up for that giant hole in the ozone layer (sorry Aqua Net, but that is decidedly all your fucking fault).